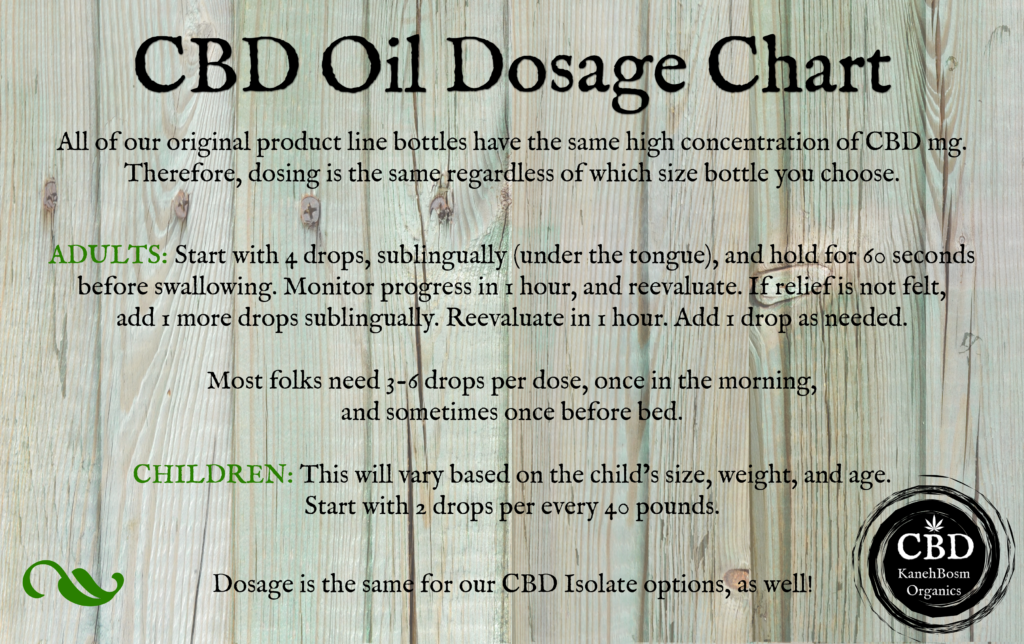 Dosing for CBD oil varies individually, as everyone’s chemical makeup is unique, so you’re most likely going to have to get to your best dose through some trial-and-error. When you do, there are good reasons to think that ratio won’t be perfect for you forever. The best way to determine your own CBD oil dosage, is to start “low and slow.”
That’s because human physiologies change over time, including the ECS (endocannabinoid system), and how densely receptors are expressed in the brain and the body. These things change over the lifetime of an individual, and so the optimal ratios and doses of these compounds, whatever they may be, are probably going to change as well.
With that said, your CBD oil dosage will also vary depending on the product you’re using, the strength therein, and the other fillers/additives in the bottle.
KanehBosm Organics’ CBD is extremely high quality, organic, nonGMO, and has no additives or chemicals or fillers. You’ll want to start with the “law of the minimum dose” and gradually increase until you find your perfect sweet spot. Most adults use 6-10 drops, twice a day. You’ll need to vary that dose dependent upon the size/weight/age of a child, to your discretion.

Keep in mind that if you’re using a brand that has other fillers in it besides CBD and hemp oil…. you’re going to need more because it’s more diluted than KanehBosm Organics’ CBD oil. Which means you’ll use up the off-brands faster, and will need to buy more, more often.

Here at KanehBosm Organics, quality is our absolute #1 priority. We strive to bring you the very best products at the very best prices. No fillers, additives, or chemicals.
Our CBD oil is simple: just CBD and hemp oil. That’s it.

Click here to choose your own CBD oil… and take charge of your health!

HOW DO WE MEASURE BALANCE IN THE ENDOCANNABINOID SYSTEM AND WHEN IS IT NOT IN A STATE OF BALANCE?

As a lab tech from Cannalabs in Colorado wrote, “Just about anyone with clinical signs/symptoms of obese-central metabolic syndrome, pain, anxiety, depression, sleep disturbance and or inflammatory/immune dysfunction will likely have some sort of ECS imbalance that can be part of a multifaceted therapeutic strategy to manage these conditions….in healthy or not so healthy individuals”.

3 TECHNIQUES TO ACCURATELY MEASURE BALANCE IN THE ENDOCANNABINOID SYSTEM.

Very few doctors have access this tech and insurance companies are unlikely to pay for it.

Many labs are doing amazing things with this technology.

Microdialysis  as a sampling technique

The idea is to measure the extracellular fluid levels around CB1 and CB2 receptors. Fairly simple and minimally invasive, it is a simple blood draw and again uses microdialysis as a sampling technique. Shamefully this cutting-edge technology in the 80’s is still only being used currently on research with animals.

The cannabis plant produces a very balanced ecology of chemical compounds that play well with a host of the system in our body that are controlled by the endocannabinoid system.

Cannabis, and its constituents, in medicinal marijuana or possibly CBD Oil, acts as a homeostatic regulator keeping the ECS in balance thus balancing your biology.

This balance is directly related to dosing, however, “MORE IS NOT BETTER”.

Multiple studies have shown that low doses cannabis sativa are particularly effective for most levels of neuropathic pain. The point being higher levels can throw your ECS out of balance and should be avoided.

Conclusion of the results were then low doses of cannabis work effectively well against most levels of neuropathic pain such as those experienced by suffers of arthritis, muscular dystrophy, fibromyalgia, and many other painful conditions.

DOSE-DEPENDANT EFFECTS OF SMOKED CANNABIS ON CAPSAICIN-INFUCED PAIN AND HYPERALGESIA IN HEALTHY VOLUNTEERS.

Researchers in the United States

The results of this study are fascinating because the scientists collected people that had been smoking 30 joints a day for years and so obviously had time to devote to an in-patient study!

These are also people whose endocannabinoid system was pretty well down regulated (out of balance) because they were ingesting so much THC.

What the researchers wanted to prove was that marijuana cause brain damage (the only way to get permission to study cannabis in this country is by attempting to prove it causes harm.) So, they basically locked these people up for 28 days and did not allow them any cannabis. After 28 days their endocannabinoid system returned to normal baseline levels in all participants as documented by brain scans.  This study demonstrates that you can smoke 30 joints a day for years, stop for 28 days and your endocannabinoid system essentially gets a reset. ( you can also get a reset by adding a little CBD to the cannabis mix.)

We are currently UNABLE TO ACCEPT ORDERS due to the economic impact of the China-Virus COVID. Please email KanehBosmOrganics@gmail.com with any questions. Thank you for shopping small and supporting our small business over the years. We love each and every one of you! Dismiss